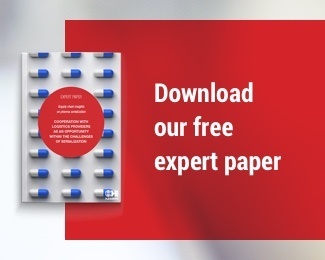 In May of this year, H.Essers built no less than 10,000 m² of additional warehousing on their site in Bucharest, Romania, while simultaneously making great efforts to establish a new direct train link between Romania and Turkey. Two smart investments which will definitely strengthen our pharma and chemicals segment in Romania and which will firmly consolidate our presence in Eastern Europe. Jeroen Fabry, Business Unit Manager CEE and Christopher Van Den Daele, Business Unit Manager High Value, will tell us more about these expansions and their added value for our customers.

Since our company first set foot in Romania with its own branch, our activities in Eastern Europe have grown strongly. Jeroen Fabry, who has been working for H.Essers in Romania for over 14 years, has followed these developments closely. “In the Bucharest region, we first built our own building in 2013. We now have 50,000 m² of warehousing at our disposal. In 2017-2018 we built another 8,000 m² on our site in Oradea, where we now have a total of 46,000 m².” This year the existing storage capacity was further expanded by another 10,000 m². And quite rightly so. “In Romania, we are one of the few fully compliant players who can store and transport Seveso-certified goods,” Christopher explains. “For the storage of hazardous goods, we haven even surpassed the regional safety standards and have equipped our buildings with the most advanced fire extinguishing systems.”

With the same care, H.Essers transports pharmaceuticals and hazardous goods by rail to Romania, partly thanks to the temperature-controlled Safeboxes which have allowed us to transport our goods safely for years. Trains leave from our own terminal in Genk to Curtici in Romania eight times a week. From there, the goods are usually transported further by road. “Since this year, however, transports from Curtici can also be continued by rail,” Christopher explains. “In cooperation with Rail Cargo Austria, we set up a new connection with Istanbul, which means trains are departing to Turkey three times a week. In the future we will even extend this to five times a week. A particularly sustainable addition to our synchromodal network, as this fully-fledged alternative replaces about 9,000 road transports.”

The investments in both warehousing and rail transport are perfectly in line with our company’s plans to expand its presence in the pharma, chemicals and high-security segments in Eastern Europe. Jeroen: “The intermodal connection to Romania is a great link between west and east, but we also want to invest more in the  north-east and south-east connections, more specifically between Hungary, the Czech Republic, Slovakia and Poland. This would be an enormous boost to the market position of our customers in Romania. Moreover, rail transport is very reliable and can easily be used across borders, even in times of crisis and congestion. This became very clear when Covid-19 happened and many countries closed their borders, but trains could continue to run without a problem.”

In the future, a direct stopover in Bucharest would be a nice addition to the flexible, multimodal network we have already rolled out today. Eastern European multinationals in chemistry and pharma are also increasingly looking to Romania for a suitable location with good access. “The logistics opportunities are numerous here, with over 1 million square meters of space still available for warehousing,” says Christopher. “Access via the port of Constanza, the Danube, proximity to dozens of European countries and the Middle East are also tremendous assets. At H.Essers we see the potential for a real logistics hub. That is why we continue to invest in Romania and continue to build on the future here with lots of enthusiasm and experience.”

Are you interested in the warehousing and transport possibilities offered by H.Essers to and from Romania? Jeroen Fabry (jeroen.fabry@essers.com) will be happy to give you more information.

H.Essers continues to grow. Therefore, the infrastructure of this logistics service provider is too. Which is why on July 19th,…

Solar panels on trucks, a first by H.Essers

For many years, solar panels have been the ideal solution to make homes and businesses more sustainable. This is also…